How NAIOP Launched a Chapter Mentoring Program to Engage Members

Find out how NAIOP's mentoring program works, the roll out to pilots and chapters, tips to running the program, and measuring success.
Home Associations Articles How NAIOP Launched a Chapter Mentoring Program to Engage Members
8   
By Charlotte Muylaert Articles Associations

The number one thing wanted by young (35 and under) members of NAIOP, the Commercial Real Estate Development Association is mentoring and career advice. In a survey, nothing—not conferences, membership, magazines nor research—ranked as high. It’s probably not so different for your young members.

“They’ve already ‘made it’ so they don’t need resources as much as younger members. Instead, since they have lots to share, they’re seeking ways to give back. But, they’re busy, that’s the challenge.”

“Knowing that mentoring was the number one thing our younger members needed, how could we help chapters provide it?” Courtney learned that the association management company for NAIOP’s Toronto chapter created cloud-based platform called Mentorship Rocket that easily matches mentors and mentees. When she shared this news with other chapters, many of them expressed interest in doing something similar.

She surveyed NAIOP’s chapters to find out which ones had mentoring programs and learned what was working and what wasn’t.

Chapters said their biggest challenges with mentoring programs were:

According to the ATD study, organizations cite these additional challenges:

NAIOP wanted to replicate Toronto’s program, but Toronto wasn’t a typical chapter—it’s the second largest with nearly 1,500 members and several staff. NAIOP needed a mentoring program that would work for all chapters, even small ones with one part-time employee.

At first, Courtney looked into off-the-shelf software but that proved to be too costly. Instead she made a deal with the creators of Mentorship Rocket to produce a customized, branded version of the platform to allow all NAIOP chapters to use it at no cost.

“We knew this software would probably be most beneficial to smaller chapters that don’t have the staff or financial resources to implement a mentoring program.”

The basic elements of the NAIOP chapter mentoring program are based on the original Toronto model. Mentors upload their bio, photo and available dates for their mentoring sessions. The mentor base is built first so their names, bios and availability are in the portal before it opens to mentees. Each chapter mentorship program has an exclusive and chapter-branded micro site within the portal.

When the program opens to mentees, they go in, mentors and pick a mentoring dates. In Toronto, spots for 500 mentees can fill up within ten minutes of opening.

Rolling out the NAIOP mentoring program

The ATD report recommends starting with a small pilot program before a larger rollout. At NAIOP, 14 chapters (out of 51) are in the midst of running or planning the launch of their first mentoring program.

“We recommend a six to nine month program,” said Courtney. “Chapters determine the actual duration, but we stipulate it must have a defined beginning and end. We also recommend allowing the mentor to decide how many one-hour sessions they want to provide within that timeframe.”

To minimize the chapter’s workload, they also provide resources, like survey templates for mentors and mentees that chapters can tweak with their own questions.

Although NAIOP provides guidance, the chapters take ownership and ultimate control over their mentoring program. For example, chapters can set parameters for program participants. “They might limit mentees to emerging leaders or to certain ages,” said Courtney. “They might specify that mentors have to be a member for a certain number of years, or be a certain member type, for example, principal versus affiliate.”

Chapters can decide on the type of matches, for example:

NAIOP hosted three webinars to introduce the program to chapter executives and volunteer leaders. Courtney gave presentations about the program at chapter board meetings. When a chapter decided to go ahead, membership staff did a training session with them to address specific needs and questions.

Tips from NAIOP on running a mentorship program

Think Mentee/Mentor: Courtney advises thinking about the mentee/mentor mix on the back end. You may have to limit the number of mentees by professional category so there’s an even match with the mentors who signed up. For example, if you only have five architect mentors, you don’t want to end up with nine architect mentees.

Anticipate Odd Situations: If a mentor’s company has a bid for work or a lawsuit pending with a mentee’s company, that match isn’t going to work. “That’s something the chapter deals with on the back end,” said Courtney. “The mentee can go ahead and sign up, but the mentor calls the office and lets them know the circumstances, and they would take care of that from their end.”

Measuring the success of your mentoring program

Because NAIOP launched the program last summer, only one chapter has run through a complete program—they’re being surveyed now. The participant surveys ask questions like:

“We’ll have a lot of ‘lessons learned’ by this summer and can look at what we can improve from the chapters and members who have completed the program,” said Courtney.

In the meantime, a dashboard shows Courtney exactly what’s going on with each program. “I can see the program dates, number of mentors and mentees, the percentage of slots booked, and so on,” she said. “I can spot situations where we might want to go to a chapter and say, ‘Hey, are you having a hard time getting this off the ground? What’s going on? How can we help?’”

Courtney is also curious to see if retention improves for members who were part of a mentoring program.

“Our retention of younger members is usually about 20 percent behind the retention of other members, so we’ll be following that data closely.”

She also hopes to get more chapters on board. “We’ll go out to those who haven’t adopted the program—those who already have mentoring programs and those who don’t—to learn why they aren’t interested. Why is it successful in some markets and not others?”

For chapters who already have their own mentoring programs, she plans to find a different way to provide value: “If you don’t need our help with mentoring, what else can we do for you?”

The guiding principle has been giving ownership and control of the program to chapters, but providing as much support as possible to ensure their success. Courtney said, “We’re doing this ultimately to improve member retention but also to give back to our chapters and demonstrate the value that NAIOP brings to them.” 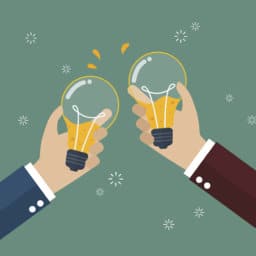